By accepting you will be accessing a service provided by a third-party external to https://readtwinning.eu/

In November, ReadTwinning partners hosted their first National Dissemination Events. Held in the national languages, the events allowed us to spread the message and the aim of ReadTwinning: connecting students through shared interests to develop a love for reading. This is the reason why the project was presented not only to teachers and school staff, but also to students, parents and school librarians.

Let's discover what happened around Europe! 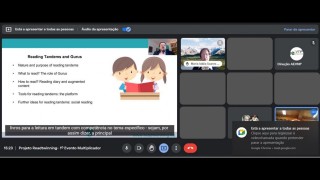 To open the events was, on November 10th, the Agrupamento de Escolas de Vila Nova de Paiva, that hosted the meeting online.

Firstly, the Portuguese team presented in detail the participants, the objectives and the methodology of the reading tandem. Gino Roncaglia, remotely connected, presented the guidelines and Pete Stevens introduced the ReadTwinning platform.

Later in the afternoon, it was the moment of a talk with Carlos Paixão, a local writer. The topic of the conversation was entitled: "How could we motivate young people to read". The writer gave a very useful piece of advice to engage children and teenagers in reading and enjoying it.

The 31 participants were diverse: from both the school Vila Nova de Paiva and from other schools, who showed a lot of interest in the project. According to the data collected by the satisfaction survey given to the participants, the evaluation of the event was very positive. 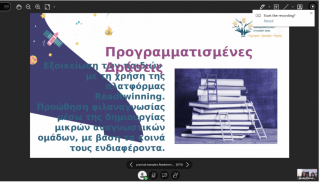 In Cyprus the online event took place on November 13th, organised by the partner European University of Cyprus in collaboration with Dimotiko Scholeio Makedonitissas 3 - Stylianou Lena.

The Cyprus team presented the contents and theoretical background of the project. Then, some examples from practices used at schools were delivered and it was discussed what happened until now and what is expected to happen in the next months.

The event reached around 80 people, for the most part teachers.They considered the meeting extremely useful for their teaching practices. Some of them stated that they would like the event to last longer!

The Italian Hands-on Dissemination Seminar was connected with the Forum del Libro Event 2021 and took place on the 17th November in Rome. The event was held both in presence and online, reaching more than 300 people.

Among the 75 participants who were present in the theatre of the "I.C. Belforte del Chienti" School there was the Italian Minister of Education, Patrizio Bianchi, who gave a speech on school libraries.

Italian television was also present and collected interviews throughout the entire event. The meeting was also streamed on Youtube and registered more than 1.000 views. It is possible to rewatch the seminar here.

Before the Forum del Libro event, Gino Roncaglia presented ReadTwinning and its platform to teachers, parents, librarians and reading groups. There was also the possibility to ask some more specific questions and the audience was extremely involved. Then, Maria Teresa Carbone interviewed Antonio Manzini, a famous Italian author and screenwriter. The issue of the interview was "Il libro fra la carta e lo schermo" (in English The book between paper and screen), which is one of the main topics that ReadTwinning wants to investigate. 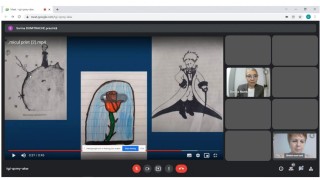 The event in Romania was organised online on November 19th coordinated by the "Scoala Gimnaziala "Constantin Parfene" .

The 71 participants were for the most part teachers from the partner school but also 31 people came from outside the school and really appreciated the meeting.

The event was very appreciated by the participants. The team will surely take into consideration the received feedback, both verbal - during and after the event - as well as written on the chat. 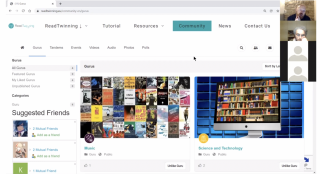 The event started by introducing the background to the project, including the inspiration for the project following partners' previous work on The Living Book project. The ReadTwinning concept of connecting readers through shared interests was then introduced and Professor Gino Roncaglia gave a presentation remotely.

Pete Stevens, Director of Gryd, introduced the ReadTwinning platform and took participants through each of its functions from initial registration, creating a profile, making friends, creating tandems, participating in a tandem, and using the Gurus for book ideas. Pete also showed some of the lesson plans produced by the school partners, and highlighted the blended course for teachers.

The participants were then given an opportunity to ask questions. We received very positive feedback from the participants during the event and it was a pleasure to spend time spreading the message of the ReadTwinning project more widely.

Already Registered? Login Here
No comments made yet. Be the first to submit a comment